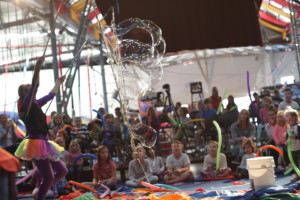 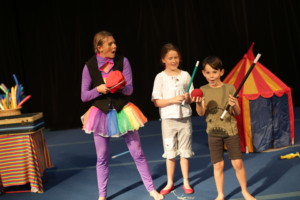 School holiday circus show, Imaginitis, was a hit with audiences of all ages at Byron Bay Circus Arts. This school circus show has been created for our smallest viewers. But despite this,  the magic, clowning and giant bubbles entertained crowds of all ages.

It’s difficult to know what makes this show so lovable. It could be that it is a heartwarming struggle of a clown trying to become a sensible grown up. Perhaps it is the way the main character tells a story, while at the same time presenting a seamless circus show. Or maybe it is just Shorty Brown herself, who is simply wonderful! What ever the reason, Imaginitis proves that it works just as well as a school holiday circus show, as it does for preschools and primary schools.

Some of the highlights of this show include appearing and disappearing balls, rhymes and dance, costume slapstick and giant bubbles. In addition to this, Imaginitis features a special animal guest at the end of the show… but we don’t want to give away that surprise!

Following on from the success of this school holiday show season, Imaginitis is off on another tour of preschools and vacation care centers in Northern NSW. So look out Northern Rivers, because Imaginitis is contagious.

And for those of you north of the border, don’t forget that Imaginitis is also available in South East QLD both within the school term, and on school holidays. To check out more Imaginitis antics, be sure to visit our Facebook page.